When a company chooses to rebrand itself, there are two common reasons: to recover from a debacle, or revitalization. The first step the CEO and other bosses must take is to ensure that a rebranding is truly the best step.

Perhaps after a debacle, the decision is easy. On the other hand, if the goal is to add more energy and revitalize a brand, it can be quite difficult to know if rebranding is the right move, as it so often backfires. But once the decision has been made, for anyone wondering how to rebrand a business, we have a guide to help you:

Besides the obvious, a company should rebrand when consumers no longer want a relationship with its brand. The old toothpaste commercials used to say that four out of five dentists recommend their brand. When four out of five don’t want anything to do with a brand, it is time to overhaul your image and rebrand.

Discovering the right rebranding strategies isn’t easy. Once upon a time, Coca-Cola thought they needed to rebrand to bring some new life into their company.

The company used ‘New Coke’ as a way to rebrand its century-old product. The result was a failure. To do a good job of rebranding, it is incumbent to find out what made customers attracted to the company in the first place; or, what characteristic you lack that attracts them to a similar company. Of all the rules for rebranding, finding the people’s passion – the reason they love or hate a brand – is the most important.

Coke’s problem was not the flavor – changing it alienated loyal customers and didn’t reinvigorate the brand in any way. Nor was the problem the Coke can. The branded link for many is the red can and white writing.

In fact, some people suspect the entire rebranding effort was a sham way to remind people how much they liked Coke just the way it was – and to get free publicity during the transition to New Coke, and then back to the “old” Coke again.

Another example of an unsuccessful rebranding was Tropicana. The orange juice company decided that the old label was outdated. So in 2009, they chose to redo the design of their cartons. But customers quickly decided they didn’t like the new look of their old, faithful orange juice. The company realized their blunder and returned to the old design, but not before sales dropped by 20%. People had a strong connection with to that original carton.

When rebranding hits a speed bump, there is no guarantee that customers will return. Customers did return to Coke, but it took much longer for customers to return to Tropicana.

Rebrand Only if Something Is Changing

Don’t rebrand your business if all you’re doing is changing the name. A negative rebranding example where nothing but a name change occurred was when Radio Shack became – The Shack.

Maybe they thought The Shack sounded more hip? The thing is, all Radio Shack changed was their name. They had no new product line. They did not have a big sale to draw a great deal of attention to their new ‘brand’. Nothing was changing with Radio Shack other than its name. That rebrand did not work and they ended up shutting the doors of more than 1,000 stores.

The first step in how to rebrand is to find out what customers were loyal and passionate about. Apparently, for Radio Shack, the name was not the answer.

How to rebrand successfully

One successful way to rebrand is to create a buzz around your new image. When Old Spice discovered that well over half of the people purchasing their products were women, they cleverly decided to create buzz with this newly discovered target demographic in mind. Old Spice created commercials for them and came up with catchphrases aimed at women, such as, “The man your man can smell like”.

Old Spice’s rebranding has been a success. During the first year of its new focused rebranding, website traffic increased by 300%. People were going online to look for the company’s commercials! Sales of their products and YouTube subscribers went up more than 200%.

After this successful campaign, the brand then went on to build itself an image as an easy-going and humorous brand and now it appeals to young men as well.

What if a Brand Problem Isn’t Your Fault?

Burberry has been around for more than 150 years, but somehow, this luxury clothing company managed to go down the wrong road in the nineties. Burberry was viewed by some as frumpy or a brand for older women. While it was viewed by others as a clothes brand worn by English gang bangers. It is unclear how those two seemingly incongruous thoughts about Burberry occurred at the same time, but they did, and neither helped it sell clothing.

For a while, it was even reported that people wearing Burberry weren’t allowed into some nightclubs because the people wearing clothes made by the label were causing trouble.

Then, soon after the turn of the century, Burberry overhauled its look. They didn’t change their name – or their slogan. They did something much more effective. Burberry changed their image to be more modern while also keeping some of their classic style, hiring Emma Watson, Kate Moss and other young, hip entertainers to represent them. The result was a $747 million third quarter 🤑

Burberry went from being old and staid, and associated with “gangbanging”; but what will Subway do? Subway is a rags to riches to… we’ll have to wait and see what happens.

Subway was an also-ran in the fast food wars. Then, they did what any successful rebranding starts with – they evaluated what they did well. They decided that people who connected with them did so because they offered a healthier alternative to fast food. Enter, Jared Fogle.

Jared Fogle was a large man who lost weight, in part, by eating low-fat Subway sandwiches. The result was Jared became a household name; a sort of cult-status everyman. Subway went from an also-ran to one of the biggest fast food restaurants in America. Then things went bad. In 2015, Jared Fogle ended up in prison for crimes that many will find unforgivable, and one of the most iconic symbols associated with Subway was gone.

Will Subway have to go back and figure out how to rebrand itself to get the smear associated with Fogle removed from their name? Well just last month, the company launched a new look ad campaign during the winter Olympics. Naturally, it didn’t hark back to the old adverts that featured Fogle, but it displayed the same old brand values, just with a little more style and youth appeal.

It will be interesting to see if this rebrand will be enough to keep Fogle from harming Subway’s name and what the brand will do to communicate its message in future.

Rebranding is complicated. When is the right time? Is rebranding really the solution, or will it create a New Coke or Tropicana problem? Do you know the thing that people like about your brand, and what it is that keeps them from connecting with you?

Without this knowledge, rebranding won’t work. But if you know what your loyal customers want, you can find a great way to present that to them and rebrand in an effective way.

Davide De Guz
Founder at Rebrandly and CEO at ClickMeter, he has more than 15 years of experience in Internet business as entrepreneur and top consultant. He is the author of many articles regarding Internet and new technologies 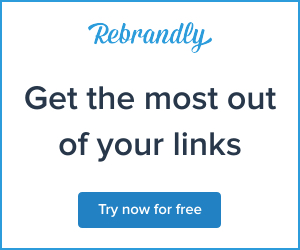