Last week, we joined droves of marketers, designers, technologists and digital enthusiasts for two jam-packed days at DMEXCO. For the second year in a row, Rebrandly hopped, skipped and jumped over to Cologne, Germany, but this time we were there both to attend and to speak.

For those of you who might not be familiar, DMEXCO is the world’s largest digital marketing expo and conference. And to say it’s the world’s largest is no exaggeration. Somewhere between 40,000 to 50,000 people would attend between the 11th and 12th of September, but what was more impressive than the guest list was the vast halls with over 1,000 exhibitors.

Massive doesn’t even begin to describe the scene, with all the household names like Facebook, Google, and Microsoft boasting double-decker booths, intricate activations and plenty of treats and swag. For us, Adobe was the clear winner of the battle of brand activations, with a 3 part set built to transport you back to the 90’s to the dawn of digital advertising. We learned how the first digital ads were created and saw the drastic changes that have taken place since then. As nostalgic as their display was, it was even more interesting to see attendees who had never used the early computers and floppy disks Adobe brought along for the ride.

In a separate but equally vast hall, companies set up demo stands, giving visitors a chance to try out their products hands-on and get advice from experts. Facebook Marketing Partners had classroom-style seminars running every half an hour, describing how to bring their tried and true advertising strategies into each attendee’s organization.

It wasn’t just about intricate activations or booths filled with swag though. DMEXCO saw 570+ speakers from all over the world fill 250 hours of speaking slots, both on-stage in front of massive audiences and spread across seminar rooms. Brands like Shopify, Instagram, and Slack graced the main stage with different topics, but their message to crowds included a similar theme: users and consumers expect to have personalized and trustworthy interactions with brands in the current digital landscape. One of our top talks was the discussion between Harley Finkelstein, COO at Shopify, and Ben Frances, CEO of Gymshark, talking about the new era of retail and how both of their products were built out of the need to solve a problem they were facing as consumers.

Included in that speaker list (though, for my nerves I was grateful not to be on the main stage

) was yours truly. With major players putting so much emphasis on how they acquire customers, it made perfect sense to discuss the actual method of communication online- the link. Since the theme of the entire conference was “Trust in You,” talking about the importance of branded links felt like a particularly important topic. Above and beyond digital marketing, conversations shifted to include privacy, trust and control- really valuing their importance to customers.

Helping companies build visibility through trustworthy, branded links is our M-O at Rebrandly after all.

We were delighted to be a part of this ever-expanding conference and expo. Thanks to the fantastic team at DMEXCO for hosting us and giving us the stage to talk about empowering a brand’s communication strategy through branded links. We’re looking forward to joining again next year already!

This article is about: 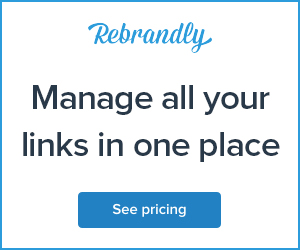